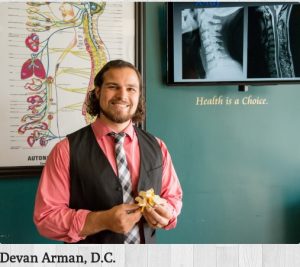 Dr. Devan Arman is a Tennessee native chiropractor in Franklin, TN and a Board Certified chiropractor who graduated with a Bachelors of Science in Health Science and Biology. He also received his Doctorate of Chiropractic from Life University. He practices two of the most specific techniques in chiropractic history.

Dr. Devan Arman is on a mission to make sure that the community thrives in life, rather than suffers. He learned late in high school that the body is capable to heal itself and was designed to handle any and all situation if under the right conditions. He then aspired to be a chiropractor from high school after shadowing multiple offices. He is a native of Tennessee, graduating with a Bachelor of Science in Health from Middle Tennessee State University. He believes that the body has been made to heal from the inside-out, and made it his mission to deliver this message to as many people as possible. Over the course of undergraduate and graduate school, he visited and shadowed over 60 offices to learn from the best in order to provide the most efficient care possible.

While Dr. Devan was in chiropractic college, he was president of a chiropractic skill based organization where he built the organization up to the largest in the nation, alongside his fellow certified members. This organization was focused on teaching and improving chiropractic skills of fellow students in the chiropractic technique called Gonstead. He also was certified in extremity chiropractic, providing optimal movement and functioning of the shoulders, wrists, knees, feet, and other joints in the body aside from the spine. However, his focus and expertise is to provide the most specific scientific chiropractic care to the central nervous system via the spinal column and all of its vertebrae.

He has extensive training and experience in pregnancy, pediatrics, athletics, and overall wellness promotion. He has seen results with chiropractic varying from multiple sclerosis, Parkinson’s disease, fibromyalgia, chronic pain, migraines, sinusitis, arthritis, acute pain, and many more. He has also had the opportunity to watch many children benefit from chiropractic care with health issues like autism, ADHD, colic, bed wetting, and ear infections.

Dr. Devan loves spending his time in athletics, CrossFit, and as much time as possible with his wife Brooklyn. He is very excited to be back in Tennessee to provide the highest quality chiropractic care through T.R.T. (A gentle neurological Chiropractic technique) and Gonstead Technique for the community of Franklin, TN and all of its commuters.